I implemented Suffix Tree algorithm in Python in the past few days, you can refer to my github repository if you’re interested in. The famous tutorial on stackoverflow is a good start. If you pay enough attention to some details like state updating or suffix links managing, you can write the code by yourself for sure. When a lot of small operations are entangling together, the ancient trick flowchart is always a wise choice for assisting. Also a tree visualizer might help a lot with debugging for sure. In order to make the intervene of the processes easy to understand, we demonstrate the flowchart in this post.

I composed a program without the help of a flowchart at the beginning, and it could handle a lot of strings well enough. However, when I tried a long and weird string, it failed. I gave up the original codes after 3 days of attempts. I picked up a piece of paper, and drew the flowchart bit by bit. Literally, for the first time, I felt the power of a flowchart. 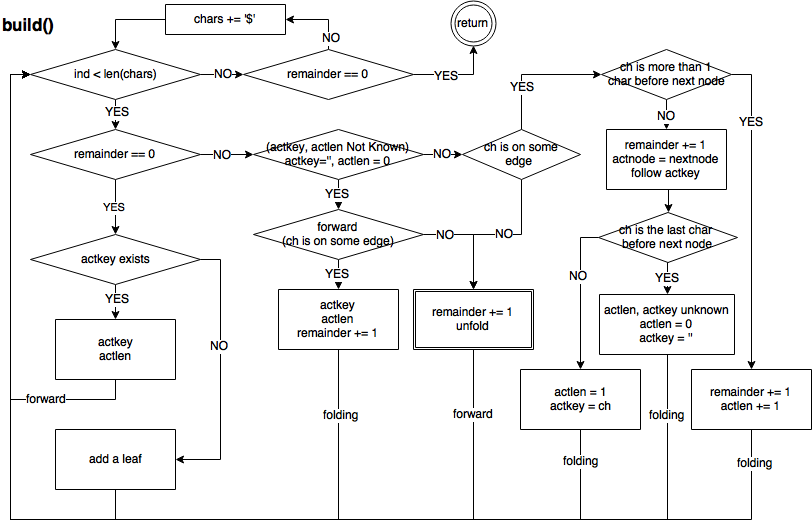 You can start checking out diagram from the top-left, will experience judging block, moving operation, variables updating and so on. The special cases, for example, where split is required, moving forward is required, interrupting the current unfolding process is required and so on, are treated respectively. Complex operations such as moving, unfolding, split, and suffix links maitainance are extracted as separate functions as below.

Depending on the LENGTH of a suffix link chain, to exhaust the REMAINS string needs either one single continuous unfolding process, or multiple unfolding process (processes other than the very first should be restarted from root node).

When the string is not well-ended (forward move fails to find a different char to split), we need to append a unique char (e.g., '$') to the end of the string.

Depending on the position of the actkey, a SPLIT can happen on a node or an edge.

Before the end (stopping shortening REMAINS string) of a unfolding process, add lately split (or should be split but has already been split before) node to the previously split node. There are some important rules and observations from stackoverflow, we need to stick strictly to the them in order to make the moves right.

If we split an edge or add a leaf on an internal node, and the current actnode is not the first expanded node in this round of unfolding process, link the previous actnode to this actnode with a suffix link.

When the char we want to add to the tree is already on the edge, we update actkey, actlength, and remainder respectively.

When the final char we need to insert is found to exist in the tree already, we update the remainder, actkey and actnode accordingly, although the tree is not changed, but the operation here should be taken as an expansion, which means suffix link should be added to its previously expanded one.